(New York, N.Y.) — The Counter Extremism Project (CEP) reports weekly on the methods used by extremists to exploit the Internet and social media platforms to recruit followers and incite violence. Over the past two weeks, white supremacists have uploaded a variety of content, including podcasts and propaganda videos, to YouTube in violation of the site's hate speech policies. The streaming site has not removed these videos after they were reported.

In addition, the ISIS bomb-making video linked to the Manchester Arena perpetrator Salman Abedi was uploaded to several websites. CEP researchers located 12 Instagram accounts that posted neo-Nazi, white supremacist, or extreme right-wing content, including posts glorifying mass shooters and terrorism. Neo-Nazis retaliated against two court decisions by posting the alleged addresses of a state and a federal court judge to a neo-Nazi accelerationist Telegram channel. Finally, on Telegram, instructions for making several different types of explosive devices were located, however the communications platform did not remove the channel.

CEP located three uploads of a white supremacist propaganda video on YouTube made by a media group linked to the Rise Above Movement (RAM). The video falsely claims that the Waukesha parade murders on November 21 were an anti-white terrorist attack. Footage includes protests by the white supremacist National Justice Party, an interview with the alleged attacker, and a statement from RAM co-founder Robert Rundo, who is allegedly hiding out in Serbia. YouTube has previously removed a series of videos made by Rundo and the same media group specifically for violating the streaming site’s policy prohibiting hate speech.

All three YouTube uploads contain the media group’s logo, and the videos had a combined total of 86 views approximately one week after they were posted. Two videos were age restricted based on YouTube’s Community Guidelines, and one video had a warning label that “The following content has been identified by the YouTube community as inappropriate or offensive to some audiences.” A Telegram channel affiliated with a RAM inspired white supremacist group in Colorado stated that online supporters should create fake Facebook accounts and post links to the propaganda video in local Waukesha Facebook groups and attempt to get the footage shared in the local community. CEP reported the videos for violating YouTube’s policies against promoting hatred, but the videos were still accessible 4 days later. 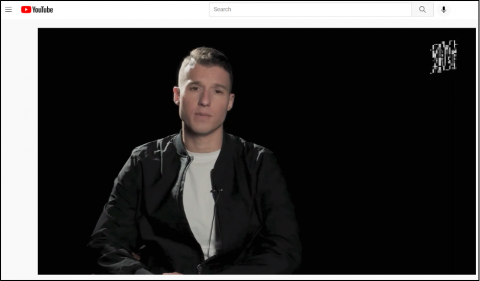 On February 15, CEP researchers located a notorious ISIS bomb-making video uploaded to several websites that instructs viewers on making explosive devices using commercially available products. The video version uploaded contained Italian subtitles. The specific video has been linked to the May 2017 Manchester Arena bombing perpetrator, Salman Abedi, who killed 22 people and injured hundreds more. The video also encourages attacks in the West and shows knife tactics on a human target who is executed in the process.

CEP researchers located a white supremacist podcast on YouTube, live-streamed initially on the platform on February 5, 2022. The podcast, part of a series that has been streamed on the site since at least March 2020, contained a known neo-Nazi who previously hosted an accelerationist podcast that encouraged acts of violence. The episode located in February had approximately 450 views twelve days after it was live-streamed and was advertised on Telegram. The channel that uploaded the video had over 300 subscribers and approximately 3,500 total views. CEP reported the podcast for violating the streaming service’s policies on hate speech due to the podcast’s explicit antisemitism and use of slurs, but YouTube did not remove the video.

The 12 accounts had an average of 240 followers, with a range between 20 and 702. The first piece of extremist content on each account was posted an average of 66 days before CEP located it. The content praising the Christchurch terrorist was online for 24 hours before CEP reported it, after which, it was removed, however the profile remained online.

On February 16, a neo-Nazi accelerationist Telegram channel posted what it alleged to be the home address of an Illinois circuit court judge and a federal judge in retaliation for two court decisions. The channel used antisemitic and racist anti-immigrant terms when referring to both individuals. At least 11 additional Telegram channels shared the information within 24 hours.

The Telegram channels that shared the doxes are part of a network of channels that share accelerationist neo-Nazi and white supremacist content and encourage acts of violence against law enforcement, Jews, Muslims, immigrants, people of color, LGBT people, and others. On February 14, the U.S. Marshalls Service (USMS) reported that U.S. federal judges received over 4,500 threats and “inappropriate communications” in 2021. It is possible that the February 16 Telegram doxes were an attempt to gain publicity by the channel creator following the USMS statement. At least three prior versions of the Telegram channel have been removed from the platform.

On February 7, CEP researchers located a Telegram channel that provided instructions on making several different types of explosive devices, bomb components, and homemade firearms. The channel also posted a wide variety of survivalist manuals and directly encouraged acts of terrorism. The channel began posting content in early February 2022. CEP reported the account to Telegram on February 7 for violating the company’s Terms of Service that prohibits the posting of content that “Promote(s) violence on publicly viewable Telegram channels, bots, etc.” but the channel was not removed.