This past week, CEP located on Facebook a variety of pro-ISIS content ranging from full-length videos to pages from ISIS’s al-Naba newsletters, as well as Amaq news photos and text news posts. The seven accounts that had their followers listed averaged 886 friends or followers. Only after CEP reported the accounts and content did Facebook start to remove some, but not all content. Three accounts and two full-length videos were removed, but after the latter were online for months and received hundreds of views.

One account, with 603 friends, posted a full-length ISIS video, “Jihad of the Believers Continues #7,” on August 28, 2022. The video was originally released on March 24, 2022. The video had 900 views 59 days after it was uploaded. The video located on Facebook covered ISIS logos on the top right of the screen with an emoji. It is not clear why Facebook did not detect the video upload. The video was removed after CEP reported it. 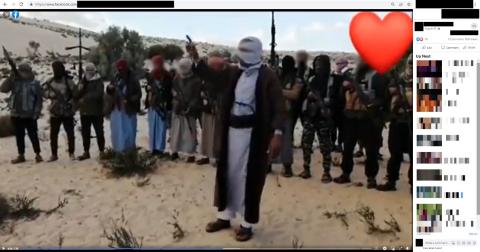 The ISIS video “Jihad of the Believers Continues #7,” on Facebook, 59 days after it was uploaded. ISIS logos on the top right of the screen were hidden by an emoji. Facebook removed the video after CEP reported it.

CEP researchers also located an upload of the full-length ISIS video “The Malicious Seeds in the Imprisoned Bilad al-Haramayn.” The video was originally released on December 19, 2015, but the uploader was able to post the approximately 34-minute video on Facebook on May 31, 2022. One hundred forty-eight days later, the video had over 1,500 views. Like the other full-length ISIS video that CEP located, the account owner obstructed logos on the top right of the screen with an emoji. Facebook removed the video within 36 hours after CEP reported it.

CEP reported the page to Facebook for violating their Community Standards on hate speech, however, it was still accessible approximately 36 hours later.