Last month, federal prosecutors accused Abdulrahman Al Qaysi of Richmond, Texas, of spreading ISIS propaganda on Facebook for years, among other crimes related to his role in the United Cyber Caliphate. Al Qaysi had used the platform to disseminate a variety of violent pro-ISIS videos and images, including beheadings and a photoshopped image of the Statue of Liberty flying an ISIS flag and sharing a “kill list” on a number of occasions, which included State Department and military officials.

Cases like Al Qaysi’s are why CEP continues to hold Facebook accountable. CEP located on the platform a variety of ISIS and pro-ISIS content on multiple accounts within the past week. This included propaganda videos and photos, as well as pages from an ISIS newsletter. Among the videos found was an upload of a recently released ISIS video ,“Upon the Path of the Conquerors,” with almost 1,000 views, as well as a video originally released in 2016.

The extremist and terrorist content found by CEP researchers on Facebook are clear violations of the platform’s Community Standards, yet it often fails to be removed. CEP encourages Facebook to take concrete action regarding the misuse of its site, including by providing Meta’s Oversight Board with access to any and all information related to its inquiry; bringing on external experts with core computer science skills, such as U.C. Berkeley professor and CEP Senior Advisor Dr. Hany Farid, onto the Oversight Board; and integrating Oversight Board members onto its corporate board. Meta is responsible for the extremist content on its platforms, and it must begin to act as such.

In a sample of pro-ISIS content found on August 10, CEP researchers located nine accounts and one page that posted a variety of propaganda. Content posted by the accounts included a full-length ISIS propaganda video released on July 30, 2022, as well as older previously released ISIS videos, clips taken from ISIS videos, Amaq propaganda videos, ISIS propaganda photos, and pages from ISIS’s weekly al-Naba newsletter, and pro-ISIS text. The nine accounts had between 24 and 1,185 friends or followers, with an average of 622. CEP additionally located a page with over 1,200 followers that posted the text of ISIS news updates, created on May 27, 2022.

CEP continued to find versions of the ISIS video “Upon the Path of the Conquerors,” released on July 30 from ISIS’s self-proclaimed state in Somalia. One upload, consisting of the full approximately 25-minute video, was added to the social media site on August 1 and had almost 1,000 views when it was located on August 10. 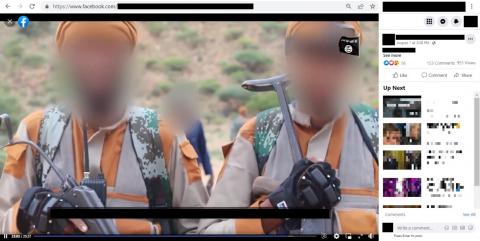 ISIS video “Upon the Path of the Conquerors,” originally released on July 30, on Facebook, August 10.

CEP researchers also found a full-length ISIS video from the group’s al-Furat Media Center, originally released in April 2016. The version on Facebook was uploaded on July 25, 2022, by a pro-ISIS account and had 173 views on August 10. 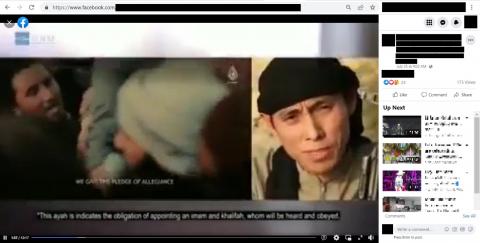