A Month After the Shooting, Extremist Content Keeps Finding its Way Online

The Counter Extremism Project (CEP) reports weekly on the methods used by extremists to exploit the Internet and social media platforms to recruit followers and incite violence. This week’s edition finds that videos from the Christchurch terror attack are still being uploaded online. Further, ISIS content and propaganda is found on nearly two dozen platforms.

“In the month since the New Zealand Christchurch shootings, it would be reasonable to expect that tech companies have had more than enough time to figure out how to stop uploads of the attack video on their platforms,” said CEP Researcher Joshua Fisher-Birch. “However, CEP is still finding multiple instances of the shooter’s video online, including on Google-owned YouTube. Efforts touting the removal of extremist content are certainly meaningful – but the standard should be removal at the point of upload, or within one hour before it can spread. Based on the continued availability of clips taken from the Christchurch shooting video, it is clear that YouTube is not able to consistently meet that standard.”

Three clips from the Christchurch Attack were located on YouTube last week. Two clips were from the Christchurch attack video and an additional video contained audio from the attack video. The videos, two were six seconds long and the third was four seconds long, do not contain violence and only consist of a phrase that Tarrant said in the video. The video was not modified. The audio-only video was uploaded on April 5 and had 287 views on April 11. The two other videos were uploaded on March 18 and March 30, and had 316 views and 683 views respectively on April 11. It is unclear why YouTube’s AI systems failed to identify these clips as belonging to the longer Christchurch attack video. 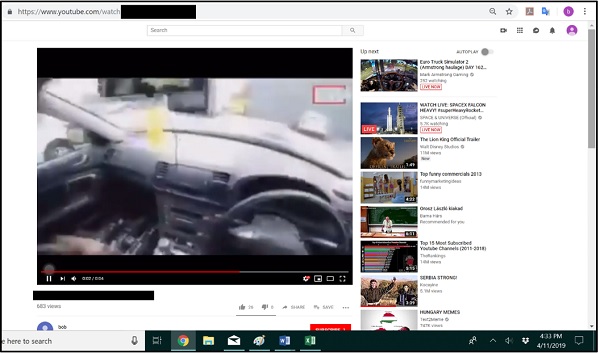 A clip on YouTube, taken from the longer Christchurch attack video, uploaded on March 30 with 683 views on April 11. CEP modified the image to obscure information.

Four different links on YouTube were located last week for a song praising the Christchurch attacker. The song, originating on 4chan’s /pol forum, features lyrics vilifying Muslims and supporting the attacker. One version of the video uploaded on March 18 was removed for “violating YouTube’s Terms of Service.” However, other links uploaded before the 18th, have remained. The original song and modified versions became a meme after it was featured in a video game. On April 11, the links had 4,976, 3,923, 419 and 74 views. Comments on the videos feature numerous instances of praise for the shooter and the massacre.

The video made by the New Zealand shooter was located on the Internet Archive last week after the site removed copies following the March 15 attack. Two links for the full video, both uploaded in early April, were located with 56 and 63 views respectively. Neither video was modified. 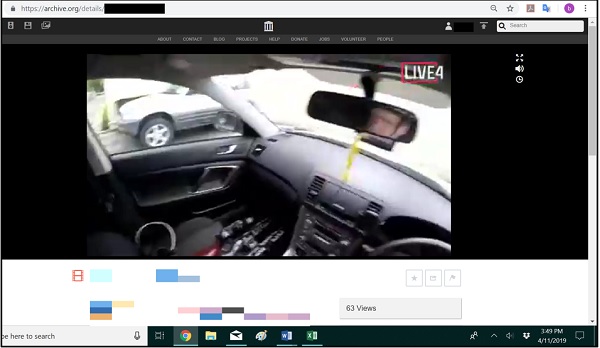 On April 7, ISIS’s Amaq News Agency uploaded a video to several websites that featured a prisoner identified as a member of the Syrian armed forces, and the bodies of two men alleged to be Russian military officers. On March 21, 2019, the U.S. State Department added the Amaq News Agency as an alias to ISIS’s designation as a Foreign Terrorist Organization. In addition to Telegram, the video was uploaded to at least 15 websites: Google Photos, Google Drive, the Microsoft One Drive, the Internet Archive, Dailymotion, Top4top, file.fm, mega.nz, nofile.io, ok.ru, Streamable, Tune.pk, Dropbox, Mediafire and Vidio. Approximately three to four days, later, the video was still available on five websites: the Internet Archive, Top4top, nofile.io, ok.ru and Vidio. 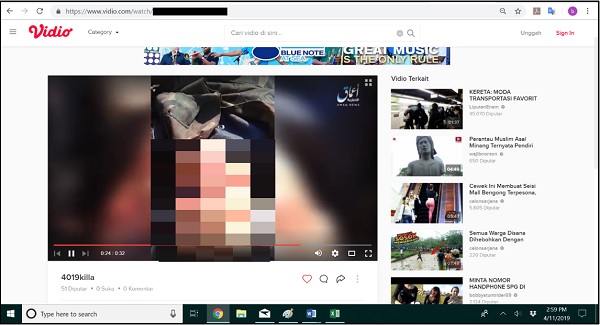 A video made by ISIS’s al-Himmah library titled “Sha’ban: Virtues and Provisions” was re-uploaded to several websites this week. The video was originally released in May 2017 and recommends certain religious practices for the month of Sha’ban.  ISIS’s al-Himmah library produced videos and written material advising proper religious rituals. Many of the al-Himmah videos are lacking the iconography and symbols of other ISIS propaganda videos. The video was uploaded to at least eight websites: Tune.pk, the Internet Archive, file.fm, nofile.io, Streamable, Dropbox, mail.ru and Top4top. Approximately five days after the video was uploaded, it was still available on five: Tune.pk, the Internet Archive, file.fm, Streamable and Top4top.​ 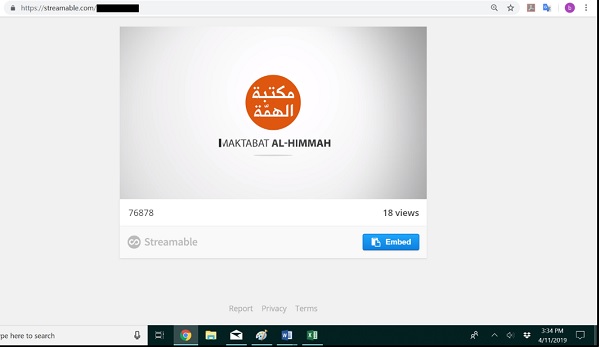