(New York, N.Y.) – The Counter Extremism Project (CEP) reports weekly on the methods used by extremists to exploit the Internet and social media platforms to recruit followers and incite violence. This week, an anti-Semitic Instagram account, that is a copy of a Telegram channel, was located. The Instagram account seeks to threaten and intimidate Jews, has posted content advocating for violence, and has denied the existence of the Holocaust. ISIS and eco-fascist content including propaganda news reports and photos of executions and captured weapons was located on Telegra.ph. Also, approximately 20 far-right Telegram channels that posted content praising mass shootings, and encouraged the intimidation of individuals based on their religion, race and ethnicity were blocked by Apple on January 20.  Additionally, ISIS Amaq news videos including the execution of a Christian man in the Borno region of Nigeria were available on over nine different websites.

CEP researchers located an anti-Semitic and white supremacist Instagram account that posts photos of Jews and their tweets regarding anti-racism, religion, gender, and sexual orientation, in an effort to threaten and intimidate them. The account also posted videos that encourages violence against Jews and denies the Holocaust. Many individuals listed on the Instagram page are left-wing, and many are journalists or activists. Content on the Instagram page is copied from a Telegram channel with the same name. The Instagram page contains links to the Telegram channel. The Instagram account was reported on January 24. However it was still active as of January 27.

“The cross platform dissemination of a known anti-Semitic account that encourages violence is one example of how tech companies are failing enforce their own Terms of Service and why they must be proactive in their approach towards online extremists.” said CEP researcher Joshua Fisher-Birch. “Those who seek to intimidate others based on their religion, race, or ethnicity, should at the very least not be able to use mainstream social media sites to amplify their message.”

Comments on the Instagram page made by the account’s followers include anti-Semitic and white supremacist statements. On January 27, the Instagram account had over 1,400 followers and had cumulatively posted photos of approximately 440 individuals. On the same day, the Telegram channel had cumulatively posted photos of over 1,340 individuals. At least one Twitter account purporting to belong to the Telegram channel creator was removed from that platform in March 2019.

On Monday January 20, Apple blocked Telegram users from accessing approximately 20 channels on Apple iOS devices. The channels violated the App Store’s Review Guidelines. Apple’s App Store prohibits “objectionable content,” which it defines as “defamatory, discriminatory, or mean-spirited content, including references or commentary about religion, race, sexual orientation, gender, national/ethnic origin, or other targeted groups.” The approximately 20 Telegram channels affected on January 20 include those that have called for violence, posted videos from mass shootings, praised mass shooters and extreme right-wing terrorists, encouraged the intimidation of individuals based on their race, ethnicity, or religion, or posted neo-Nazi literature or propaganda. Notably, the channels were banned prior to the Richmond, Virginia demonstrations on January 20. Several of the banned channels had encouraged violence at the protest.

Both ISIS and eco-fascist content were located on the Telegra.ph pasteboard platform. Telegra.ph is a function of Telegram, and allows users to share content with individuals who do not have Telegram accounts. ISIS content was posted on January 22 and 23, and included propaganda news statements and propaganda photos of executions and captured weaponry, and embedded Amaq propaganda videos showing combat. The page posted on January 22 was removed from the platform in approximately 24 hours.

An eco-fascist manifesto was also located on Telegra.ph. The manifesto was originally posted in October 2019, but was recirculated. The document endorses white supremacy, declared that cities are unsustainable and that city dwellers have ethical and moral failings, and alleged that white urban voters in the U.S. have abandoned their true interests. The manifesto encouraged damaging infrastructure as a way to fight back against urban areas, including water systems, and electrical and transportation infrastructure.

Two recent ISIS Amaq videos were located available on multiple websites several days after they were uploaded. The first video, posted on January 18, 2020, shows the execution of a Christian man in the Borno region of Nigeria with a handgun by an ISIS child fighter who is approximately seven to nine years old. In addition to Telegram, Hoop, and TamTam, the video was uploaded to at least nine other websites: Amazon Cloud Drive, File.fm, Streamable, Top4top, Dropbox, Mediafire, the Microsoft One Drive, the Internet Archive, and Mega.nz. Approximately five days later, the video was still available on six websites in addition to Telegram, Hoop, and TamTam: Amazon Cloud Drive, File.fm, Streamable, Top4top, Mediafire, and Mega.nz. 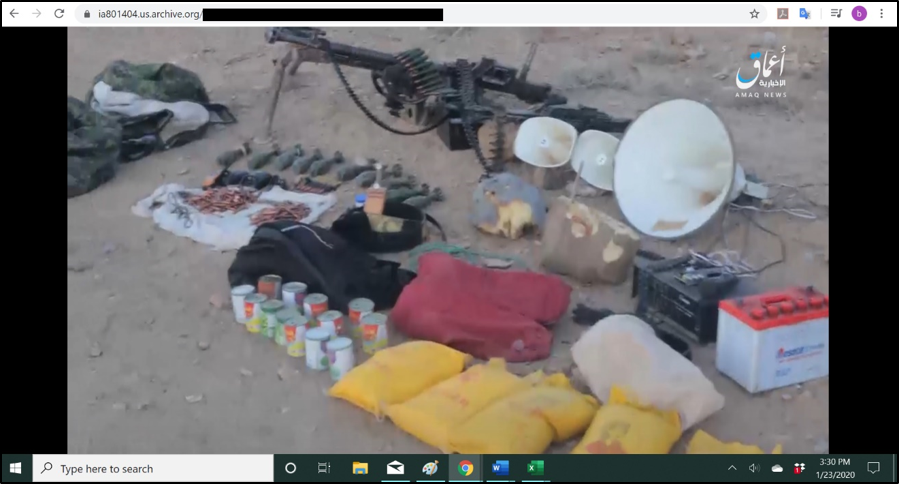 ISIS Amaq propaganda video on the Internet Archive, approximately two days after it was uploaded.