(New York, N.Y.) – The Counter Extremism Project (CEP) reports weekly on the methods used by extremists to exploit the Internet and social media platforms to recruit followers and incite violence. This week, a pro-ISIS account that linked to propaganda appeared on YouTube and an unofficial media group that supports the terror group released a video titled, “The Severity of the Caliphate” on multiple websites. Lastly, instructions for making TATP (triacetone triperoxide) explosives were shared on a white supremacist Telegram channel.

CEP researchers located a pro-ISIS YouTube channel with links to more than a dozen ISIS videos on another website, as well as ISIS propaganda on archived JustPaste.It pages. The YouTube channel, titled “Islamic State,” included a stylized photo of the group’s leader, Abu Bakr al-Baghdadi, as their icon, and had a banner image that included an ISIS flag.

“In July, CEP flagged that ISIS was finding ways to deliberately avoid obvious markers for automatic removal on YouTube. This time around, the pro-ISIS channel identified should have been more obvious to any filter, given its brazen glorification of Baghdadi and role as a repository for additional propaganda,” said CEP researcher Joshua Fisher-Birch.

The channel was created on August 24, 2019 and had 10 subscribers on August 29. The single video uploaded on the account, an approximately two-minute video of a dying alleged ISIS fighter describing paradise, had 20 views as of August 29, 2019. The channel linked to streaming and downloadable ISIS propaganda videos on a website on the .cf domain. 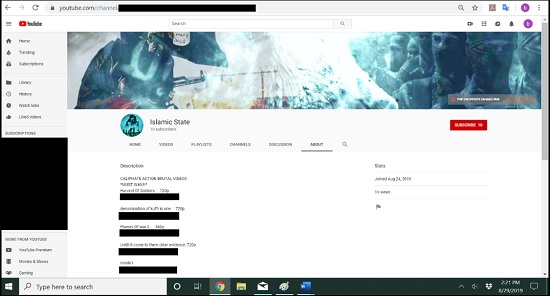 On August 24, a pro-ISIS media group released a video titled “The Severity of the Caliphate” on multiple websites. The video featured previously released footage from official ISIS videos that include dozens of executions by immolations and shootings, as well as executions committed by child soldiers. There was also footage of abuses allegedly committed by Iraqi, Syrian, and Egyptian government security forces. The video claimed that these abuses merited ISIS’s “severity.” In addition to Telegram, the video was uploaded to at least 11 websites: Vidio, tune.pk, the Internet Archive, file.fm, mail.ru, Dailymotion, Amazon Drive, top4top, Dropbox, Mediafire, and mega.nz. Approximately five days later, the video was still available on 7 websites: Vidio, tune.pk, mail.ru, Amazon Drive, file.fm, top4top, and mega.nz. 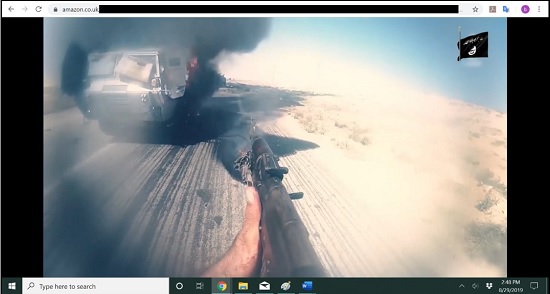 Pro-ISIS video “The Severity of the Caliphate,” which included extensive footage from official ISIS videos, on Amazon Drive, approximately five days after it was uploaded.

On Tuesday, August 27, instructions for making the homemade explosive TATP were shared by a white supremacist Telegram channel that has previously advocated for the use of violence. The channel had over 1,400 subscribers on August 29. In addition to the recipe for making TATP along with safety tips, there were also instructions for making explosive devices. The channel posted screenshots from Amazon.com of chemicals and components that can be used in explosive devices. TATP has previously been used by ISIS elements in several terrorist attacks in the West, including the 2015 Paris Attack, the 2016 Brussels Airport Attack, and the 2017 Manchester Arena Bombing. In March 2018, a Beaver Dam, Wisconsin man was killed when homemade explosives in his apartment detonated. In the following investigation, law enforcement agents located TATP and white supremacist literature in the deceased’s dwelling.