(New York, N.Y.) — The Counter Extremism Project (CEP) reports weekly on the methods used by extremists to exploit the Internet and social media platforms to recruit followers and incite violence. On August 31, al-Qaeda released a statement via the group’s As-Sahab media outlet congratulating the Taliban for defeating the U.S. and praising the Taliban’s leader Haibatullah Akhundzada and the founder and former leader of the Haqqani network, Jalaluddin Haqqani.

Over the last week, CEP researchers also have found numerous instances of white supremacist propaganda, some of which called for violence and appeared to plan for rallies, on Instagram and Twitter. One account connected to the self-identified organizers of the “White Lives Matter March” promoted the white genocide conspiracy theory. Others accounts located on Instagram included antisemitic propaganda, and photos from a video game modified to reference the Christchurch terrorist attack.

In addition, CEP researchers found a self-identified Russian white supremacist asking for advice in a neo-Nazi Telegram chat on how to launch cyberattack to shut down websites. A pro-ISIS propagandist shared a collection of statements and photos related to the August 26 ISIS attack at the Kabul airport. Finally, the neo-Nazi Nationalist Social Club activated a public Telegram chat sharing memes that promoted violence against Jews, Muslims, and transgender individuals.

On August 31, al-Qaeda released a statement via the group’s As-Sahab media outlet congratulating the Taliban on their victory. The declaration commended the Taliban for retaking the country and defeating the U.S., noting that several generations had fought in the war. The release also praised the Taliban’s leader Haibatullah Akhundzada and the founder and former leader of the Haqqani network, Jalaluddin Haqqani, and noted that the Taliban had defeated a numerically larger and well-equipped force. The al-Qaeda statement called for Afghans to obey the new government. The statement was posted on an al-Qaeda-affiliated website as well as on Telegram. The website uses Public Domain Registry as its registrar and Cloudflare as its name server.

CEP researchers located a Twitter and Instagram account allegedly connected to organizers of the white supremacist “White Lives Matter March” protests. “White Lives Matter” demonstrations took place in April 2021 and over the summer and have included multiple facilitators on Telegram as well as mainstream social media platforms. The Twitter account was created in April 2021 and contained photos from “White Lives Matter” rallies, including videos of Proud Boys’ members at rallies, banners promoting the white genocide conspiracy, and links to Telegram pages for white supremacist groups. The Instagram page for the protest movement included information on upcoming marches, as well as a propaganda photo from the neo-Nazi Nationalist Social Club (NSC), a video of two men in Proud Boys gear promoting an antisemitic neo-Nazi propaganda film that advocates Holocaust denial, and white supremacist and anti-immigration banners and statements.

From August 29 to September 4, CEP researchers located additional neo-Nazi and white supremacist content on Instagram. Researchers found an account that posted a photo from a video game modified to reference the Christchurch terrorist attack, accompanying text advocating for violence against Muslims. The post was made on July 17 and had 42 likes. Another account uploaded a compilation video that contained footage from various propaganda productions made by the Atomwaffen Division, The Base, and other neo-Nazi groups and individuals. The video was online for one week and had 90 views when it was located. Additional content included antisemitic photos, neo-Nazi propaganda, and an account that used the logo of the group Patriot Front. After the content was reported to Instagram, only the video that contained footage from Atomwaffen Division and The Base was removed, however the account that posted the video remained. 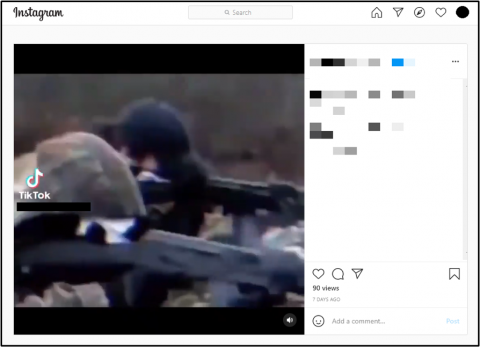 A video on Instagram that features propaganda footage from several neo-Nazi groups including the Atomwaffen Division and The Base.

On August 31, an individual who identified themselves as a Russian white supremacist asked users of a neo-Nazi Telegram chat for advice on launching distributed denial of service attacks, or other cyberattacks, to shut down websites. The alleged Russian white supremacist claimed to be part of a group that recently pressured a sushi chain to apologize for featuring a black man in one of their ads. The poster asked for assistance in taking down websites to cause economic damage and force companies only to use white people in their advertising. Three individuals in the chat, including the chat admin, offered technical advice for crashing websites. The chat is connected to a prominent neo-Nazi Telegram channel with over 9,000 subscribers that is dedicated to information and operations security that has previously released a cybersecurity manual, as well as operations security guides.

On August 30, a pro-ISIS propagandist shared a collection of statements and photos related to the August 26 ISIS attack on the Kabul airport and three dozen videos and three dozen images specifically from the group’s self-proclaimed Khorasan province in Afghanistan. Links were spread via RocketChat, but the content was hosted on a private Nextcloud file hosting site. The propaganda videos, photos, and statements were shared to be further reposted.

On August 29, the neo-Nazi Nationalist Social Club (NSC) activated a public Telegram chat. Chat participants shared an anti-Muslim meme that used a photo from the Christchurch terrorist attack video and antisemitic memes that advocated for the murder of Jews. Chat participants also praised a man by name who attacked a transgender woman on video and shared the assailant’s Instagram page so that chat members could leave a “good job message.” Other chat users shared NSC propaganda and video streams that included NSC members speaking with individuals and members of foreign neo-Nazi groups.