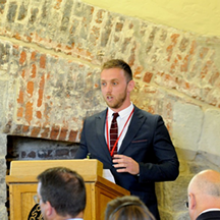 Following the October 15 murder of U.K. Member of Parliament David Amess by a man believed to have radical Islamist motivations, Counter Extremism Project (CEP) Strategic Advisor Liam Duffy published an op-ed in The Telegraph about an act of violence that shocked the nation. Duffy is a recognized expert on extremism and radicalization, and previously delivered the British government's Prevent Strategy—the prevention strand of its counterterrorism policy. In addition to The Telegraph, Liam Duffy has written on aspects of extremism and terrorism for The Spectator, The Times Educational Supplement, The Jewish Chronicle, CapX, and UnHerd, among others. Duffy was previously director of SINCE 9/11, a U.K. educational charity teaching about the September 11, 2001, terror attacks and their impact and is also a fellow at the Salzburg Global Seminar.

Mr. Duffy can be reached directly via email at [email protected] to discuss extremism and radicalization.

Western Foreign Fighters and the Yazidi Genocide
In August 2014, ISIS launched an assault on Sinjar, home to Iraq’s vulnerable Yazidi religious minority. More than 3,000 Yazidis are thought to have been killed in the initial assault, many in mass executions, while almost 7,000 Yazidi women and children were kidnapped and enslaved throughout ISIS’s so-called caliphate. Justice for the crimes has never taken place. In March, CEP conducted a webinar to discuss the Yazidi genocide and launched its new report, Western Foreign Fighters and the Yazidi Genocide, authored by Duffy. Using archived social media activity, interviews with captured or stranded foreign fighters, and first-hand testimonies from survivors of ISIS captivity, the report collates evidence of Western foreign fighters’ extensive involvement in the atrocities committed by ISIS against Iraq’s marginalized Yazidi minority. The report earned extensive media coverage, including: The Spectator, Le Vie, La Libre, The National, and La Libre.

Gradualists to Jihadists – Islamist Narratives in the West
Individuals and groups adhering to militant Islamism, a political ideology underpinned by a strict and literalist interpretation of religion, have claimed tens of thousands of lives around the world. This study, authored by Duffy, discusses the four main narratives consistently deployed by both “non-violent” and violent Islamist (Jihadist) movements: (1) Enmity for the West, (2) An Islamic State, (3) War on Islam, and (4) Communities Under Siege. While accepting the religious underpinnings of Islamist and Jihadist ideology, Gradualists to Jihadists – Islamist Narratives in the West argues that these narratives are inherently political and that Islamism should be treated in a policy sense as a political ideology like any other. Duffy also notes that because the narratives are commonly used by both violent and non-violent Islamist groups, the language of jihadists has entered the mainstream and been introduced to much wider audiences than would otherwise be possible, presenting a radicalization risk. The study’s findings were presented during a CEP webinar.

The Telegraph: “We are having the wrong conversations about extremism in Britain”
In an October 18 op-ed, Duffy argues against knee-jerk or overly simplistic responses to the  fact that the attacker of MP David Amess was known to authorities, cautioning that there is much needing to be learned about the process of radicalization: “Britain and her allies will face more jihadist terror in the coming years - that much is for certain - but we cannot hope to push back until we are more serious about tackling the ideological roots of the violence, more realistic about how people become radicalised, and more honest about our existing schemes to reverse it.”

The Spectator: “We shouldn’t forget the horrific crimes of Isis returnees”
In an October 25 op-ed, Duffy argues that absent thus far in the debate over the fate of ‘foreign fighters” for ISIS has been the suffering they inflicted on local populations, specifically the Yazidi people: “Several hundred people have already returned to Europe and been able to pick up their lives, while the communities they devastated in Iraq and Syria will not recover for generations, if at all. Above all, we must not send the message to future extremists that it is possible to travel overseas to rape, oppress and kill people already less fortunate, only to return when the going gets tough to little or no sanction. As a great man once wrote from jail: Injustice anywhere is a threat to justice everywhere.”

European Eye on Radicalization: “There is No ‘Good’ Violence in a Democracy”
In a May 5 op-ed, Duffy argues that political violence is always wrong, regardless of the perpetrators: “A hierarchy of ‘good’ and ‘bad’ political violence cannot be allowed to stand. In a democracy there is only political violence, and it is against the rules of the game. The cause does not matter to the small business owner whose livelihood has been destroyed, and it certainly doesn’t matter to the public trust which will disintegrate if institutions are seen to be hopelessly politicised and indifferent to certain forms of violence.”

Express: “Counter-terror expert urges media to stop ‘celebrisiting’ British ISIS volunteers”
“Mr Duffy hit out at the ‘celebritisation’ of western ISIS recruits. He contrasted ‘the plight of the Yazidis and the situation they’re living in now’ with ‘westerners who joined ISIS, who in some cases are living in much more comfortable conditions than their victims’. Mr Duffy added: ‘I just wish as much attention was given to the people they tormented as to the tormenters.’”

Brinkwire: “Expert debunks the ‘lone wolf’ concept, saying, ‘These guys don’t function in a vacuum.’”
“Liam Duffy, advisor at the Counter Extremism Project, has warned the UK is going in ‘the wrong direction’ to understand how to manage the threat due to a string of common misconceptions. ‘One of the biggest misconceptions is that these people are alone, this myth of the lone wolf launching an attack. Most of the time they are definitely lone actors, but even in the rare instances that they are radicalised mostly online and self-activated, they still do perceive themselves to be part of a much broader movement.’”

Express: “ISIS returns: Counter terror expert warns flood of Brits joining group could be repeated”
“Around 900 British citizens joined ISIS before the group’s self-styled ‘Caliphate’ in Syria and Iraq was crushed. However according to Liam Duffy, a strategic advisor to the Counter Extremism Project (CEP), it would be ‘foolish’ to claim this won’t happen again. Speaking to Express.co.uk, Mr Duffy warned British nationals could join jihadi extremists in future conflict zones. ‘Every conflict where Sunni Muslims have been engaged, so that gives Al-Qaeda or ISIS and jihadist groups the narrative they need to say that Sunni Muslims are being attacked and oppressed… I think it would be really silly or foolish to say that can’t happen again and the ISIS phenomenon was just a flash in the pan.’”