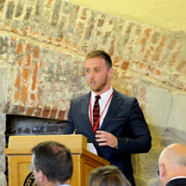 Liam Duffy is a strategic advisor for the Counter Extremism Project based in the United Kingdom. Liam previously delivered the British government's Prevent Strategy – the prevention strand of the overall Counter-Terrorism policy – in London, and was previously Director of SINCE 9/11, a U.K. educational charity teaching about the September 11th terror attacks and their impact.

Liam is a regular contributor for UnHerd on extremism, and has written on the subject for The Spectator, The Times Educational Supplement, The Jewish Chronicle, and CapX, among others. Liam is also a Fellow of the Salzburg Global Seminar.

SENTENCING: “El Shafee Elsheikh, 34, faces a mandatory sentence of life in prison after being convicted in Alexandr… https://t.co/sZLkK9zAQ3