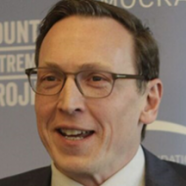 Alexander Ritzmann has been working on the promotion of liberal democracy and the prevention of violent extremism since almost 20 years. He has testified before the German Bundestag, the European Parliament and the US House of Representatives on these matters.

Alexander is an Associate Fellow at the German Council of Foreign Relations (DGAP), where he co-develops and facilitates the „International Forum for Expert Exchange on Countering Islamist Extremism“ (InFoEx). In addition, he advises the Counter Extremism Project (CEP) Berlin on internet regulation (e.g. NetzDG  2.0, AI/Transparency, and EU Digital Services Act) and on the effective countering of extremist/terrorist actors and content online.

Alexander is also advising the European Commission’s Radicalisation Awareness Network (RAN), where he particularly focuses on extremist ideologies, narratives, and strategic communications. From 2015 to 2020, Alexander was a member of the RAN Steering Committee and Co-Chair of its Communication and Narratives (C&N) Working Group. In this capacity he co-developed the GAMMMA+ model for effective alternative and counter narratives, which serves as a toolkit for practitioners all over the EU and beyond.

From 2017 to February 2020, he was a Senior Research Fellow at the Brandenburg Institute for Society and Security (BIGS) in Potsdam, Germany. There he directed a project, funded by the German federal government, that focused on the role of values in the integration process of refugees in Germany.

From 2007 to 2017, Alexander worked with the European Foundation for Democracy in Brussels, Belgium, in different capacities. From September 2012 – December 2015, he was based in Cairo, Egypt, where he worked as Senior Advisor MENA Region and Project Manager for GIZ, the German Development Cooperation. He has also lived and worked in Berlin, Brussels, Beirut, Jerusalem, Ramallah, and Washington D.C. In 2007, he was a DAAD-Fellow at the American Institute for Contemporary German Studies (AICGS), Johns Hopkins University, in Washington, DC.

From 2001 – 2006, Alexander was a member of the Berlin State Parliament, serving as the deputy chairman of the Free Democrat´s (FDP) parliamentary group and as their ranking member on the homeland security, intelligence, and data protection committees. He was also the FDP´s representative at the „council of elders“, which oversees all parliamentary procedures, and of the constitutional commission for the reform of direct democracy. Alexander received his master’s degree (Diplom) in Political Science from the Free University Berlin in 2000.