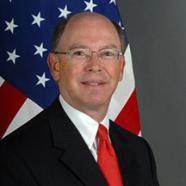 Ambassador Alejandro D. Wolff joined the Department of State as a Foreign Service Officer in 1979. His assignments in Washington include tours on the Policy Planning Staff (1981-1982); in the Office of Soviet Union Affairs (1988-1989); in the Office of the Under Secretary for Political Affairs (1989-1991); as Deputy Executive Secretary of the Department (1996-1998); and as the Executive Assistant to Secretaries of State Madeleine Albright and Colin Powell (1998-2001).

Ambassador Wolff has served in Algeria, Morocco, Chile, Cyprus, the U.S. Mission to the EU in Brussels and France. His most recent assignment was Ambassador and Deputy Permanent U.S. Representative to the United Nations (2005-2010).