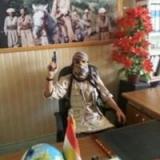 Twitter personality “Umm Jihad” (“Mother of Jihad”) is a propagandist, recruiter, and intimidator in support of ISIS.

Twitter personality “Umm Jihad” (“Mother of Jihad”) is a propagandist, recruiter, and intimidator in support of ISIS. Umm Jihad tailors her message to her female following, urging them to migrate to ISIS-held territory or execute violent attacks at home. Through Twitter, she also seeks to intimidate those who might otherwise leak sensitive information to authorities.

Through Twitter posts, Umm Jihad encourages her followers to make hijrah (migration) to ISIS-held territory. This includes migration to ISIS’s headquarters in Syria and Iraq, as well as in the group’s wilayats (provinces) scattered throughout the world, particularly Nigeria. Umm Jihad tailors this message in particular to her female following, urging ukhts (sisters) to go to Syria if they want to live under sharia, or Nigeria if they want to execute a martyrdom operation. She particularly emphasizes Nigeria, saying, “it seems like Dawlah [ISIS’s “state”] in Nigeria does allow sisters to commit Martyrdom operations. Nigeria is my new fav place.”

Umm Jihad has also called for violent attacks, inciting her female audience in particular to “go forth and attack.”

Umm Jihad has used Twitter as a platform to bully captured jihadists or prospective “snitches” into silence, writing, “For those who ever get arrested or have gotten arrested there is one rule to live by: don’t snitch.” In successive messages, she writes, “When you get arrested the only info you give those kuffs [kuffar, nonbelievers] is general info things that they already know then you sit back and shut up… When you get arrested you better take the fall for everything. You mention no names, no dates, no times. NOTHING.”

In support of her message, Umm Jihad reveals some of her self-proclaimed personal history: “When I was arrested by Fateh [the Palestinian Authority] they spent hours, days, and months trying to get me to snitch on other Palestinians… and the only thing I told them was ‘I don’t know.’ because snitches and sell outs are not welcomed in Dawlah [ISIS’s “state”].”