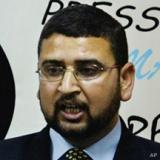 Sami Abu Zuhri is reported to be a spokesperson for the Palestinian terror organization Hamas.

Sami Abu Zuhri is reported to be a spokesperson for the Palestinian terror organization Hamas. Zuhri regularly makes anti-Semitic, anti-Israel, and pro-violence statements. In November 2014, Zuhri declared that “[all Israeli officials are] legitimate targets for the resistance.”“Hamas Says Israeli Leaders Are ‘Legitimate Targets’,” Times of Israel, November 21, 2014, http://www.timesofisrael.com/hamas-says-israeli-leaders-are-legitimate-targets/. He is believed to operate out of the Gaza Strip.

In March 2015, 26 Americans present at Israel’s Ben Gurion Airport at the time when it was targeted by Hamas missiles filed a lawsuit against the terror group. The charges of war crimes were filed against Zuhri, Hamas chief Khaled Meshaal, and other Hamas officials.Avi Lewis, “26 Americans to sue Hamas for rocket fire at Ben Gurion Airport,” Times of Israel, March 31, 2015, http://www.timesofisrael.com/26-americans-to-sue-hamas-for-airport-rocket-fire-last-summer/.

Zuhri received wide media attention in 2006 when Palestinian authorities caught him attempting to smuggle more than $800,000 in cash through the Rafah border crossing from Egypt. Zuhri claimed that he was returning from Qatar with funds that had been donated to Hamas, while the Palestinian Authority accused Zuhri of smuggling money embezzled for personal use.“Hamas Caught Smuggling Cash,” Los Angeles Times, May 20, 2006, http://articles.chicagotribune.com/2006-05-20/news/0605200133_1_palestinian-executive-branch-direct-international-aid-hamas.

Zuhri was implicated in separate incidents of alleged sexual harassment of female journalists in the Gaza Strip in 2007 and 2014, respectively.Lazar Berman, “Hamas spokesman said to have harassed female foreign reporter,” Times of Israel, December 7, 2014, http://www.timesofisrael.com/hamas-spokesman-said-to-have-harassed-female-foreign-reporter/.