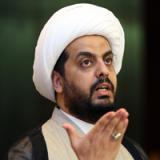 Qais al-Khazali is the U.S.-designated founder and leader of Asaib Ahl al-Haq (AAH), an Iranian-sponsored Shiite militia and political party operating primarily in Iraq.Matthew Hilburn, “One-time US Prisoner Now Key in Battling IS,” Voice of America,...

Since he was released in January 2010, al-Khazali has continued to lead AAH in both its paramilitary and political activities. When the U.S. military withdrew from Iraq in December 2010, AAH pivoted from attacking anti-American targets in Iraq to recruiting for pro-Assad militias in Syria. According to Guardian Middle East correspondent Martin Chulov, al-Khazali’s speeches have galvanized “thousands” of Iraqi Shiites to fight for Assad’s regime in Syria, worrying many Iraqi communities about “a sectarian conflict that increasingly respects no border.” Martin Chulov, “Controlled by Iran, the deadly militia recruiting Iraq's men to die in Syria,” Guardian (London), March 12, 2014, http://www.theguardian.com/world/2014/mar/12/iraq-battle-dead-valley-peace-syria.

Since that time, AAH has continued to act primarily as a militia under al-Khazali’s leadership, though the group maintains a political role. AAH today fights anti-Assad rebels in Syria as well as ISIS in Iraq. Meanwhile, the group has continued to prioritize its role as an anti-American militia, boycotting the March 2015 battle against ISIS in Tikrit because of U.S. military aid.Saif Hameed, “UPDATE 4-Iraq special forces advance in Tikrit, U.S. coalition joins fight,” Reuters, March 26, 2015, http://www.reuters.com/article/2015/03/26/mideast-crisis-iraq-idUSL6N0WS1MM20150326. Al-Khazali also continues to deliver divisive and sectarian rhetoric against fellow Iraqis. In March 2015, al-Khazali said of Iraq’s Kurdish population, “[they are] operating right now like leeches, which feed on the host’s body – sucking more and more of its blood – in an effort to grow in size.”“Iraqi Shiite Militia Leader Qais Al-Khazali: Kurdish Leaders Are Leeches, Sucking the Blood of Iraq,” MEMRI TV, March 24, 2015, http://www.memritv.org/clip/en/4846.htm.

In March 2017, al-Khazali called for the establishment of separate universities in Iraq to be run by Shiite militias within Iraq’s Popular Mobilization Units (PMUs). In the speech delivered before a crowd of university students, al-Khazali reportedly said that Iraq needed a “PMU University, through which we could address our enemies and tell them, ‘If you fear us now, you must know that the PMU is present in every university, college and department.’” According to Iraqi journalist Hassan al-Shanoun, al-Khazali’s call appears to mimic Iranian-style “cultural revolution” tactics from the 1980s. During that time, schools were closed, teachers and students were expelled, and all western and non-Islamic teachings were removed from curriculums. Al-Khazali also released a statement saying that Iraqi students “need to organize their ranks, which would allow them to overthrow any corrupt government or regime.”Hassan al-Shanoun, “Shiite militias prepare for education 'revolution' in Iraq,” Al-Monitor, April 17, 2017, http://www.al-monitor.com/pulse/originals/2017/04/university-iraq-cultural-revolution-pmu.html.

AAH ran in the May 2018 national elections within the Fatah Alliance, a coalition of Iran-backed Haashid Shaabi militias. AAH won 15 seats propelling Khazali into a position of political power within the new government.Phillip Smyth, “Iranian Militias in Iraq's Parliament: Political Outcomes and U.S. Response,” Washington Institute for Near East Policy, June 11, 2018, https://www.washingtoninstitute.org/policy-analysis/view/iranian-militias-in-iraqs-parliament-political-outcomes-and-u.s.-response.

On December 6, 2019, the Office of Foreign Assets Control of the U.S. Department of the Treasury designated Qais al-Khazali pursuant to Executive Order 13818 for involvement in serious human rights abuses in Iraq.“Treasury Sanctions Iran-Backed Militia Leaders Who Killed Innocent Demonstrators in Iraq,” U.S. Department of the Treasury, December 6, 2019, https://home.treasury.gov/news/press-releases/sm847.