Isa Britani #IS a.k.a. @IsaBritani 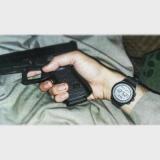 Isa Britani is an ISIS propagandist on Twitter who claims to live in ISIS-held territory.

Isa Britani is an ISIS propagandist on Twitter who claims to live in ISIS-held territory. Britani has offered help to those interested in hijrah (migration) to the self-proclaimed caliphate.Isa Britani #IS, Twitter, accessed August 27, 2015, https://twitter.com/IsaBritani. He does not specify where he is from, but the Britani moniker indicates he is of British origin. Britani has warned that “the khilafah” (caliphate) cannot be stopped. Isa Britani #IS, Twitter post, August 17, 2015, 3:07 a.m., https://twitter.com/IsaBritani/status/633173343399735296. He has praised the “mujahideen” (holy warriors) of ISIS and called for holocausts against the Kurdistan Workers’ Party (PKK) and the rawafid, or those who reject Islamic authority.