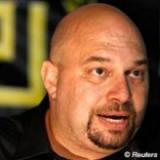 Ilias Panagiotaros was a member of Golden Dawn, who served in the Greek parliament.

Panagiotaros, along with other members of Golden Dawn, has been charged with belonging to a crimial organization and is awaiting trial. Panagiotaros appears to support many of his party’s neo-Nazi, racist and homophobic views, describing Hitler at one stage as a “great personality, like Stalin".Helena Smith, “Greece's Golden Dawn party describes Hitler as 'great personality'”, Guardian, April 16, 2014, http://www.theguardian.com/world/2014/apr/16/greece-golden-dawn-hitler. In October 2012, Panagiotaros is said to have headed a demonstration that interrupted the performance of the Terence McNally play, Corpus Christi. Panagiotaros was allegedly recorded shouting racist and homophobic insults at the director of the play, and the actors.Paul Mason, “Alarm at Greek police 'collusion' with far-right Golden Dawn”, BBC News, October 17,  2012, http://www.bbc.co.uk/news/world-1997684.

On July 8, 2019, after seven years since joining Greece’s parliament, the Golden Dawn Party failed to acquire the three percent of national votes needed to secure seats in the 300-member legislature.“Neo-fascist Golden Dawn party crashes out of Greek parliament,” Al Jazeera, July 08, 2019,  https://www.aljazeera.com/news/2019/07/neo-fascist-golden-dawn-party-crashes-greek-parliament-190708060921804.html. The waning popularity of the party is supposedly due to several prominent members, including founder Nikolaos Michaloliakos, facing charges of operating a criminal organization as well as the party being linked to the murder of rapper Pavlos Fyassas in 2013.“Endgame in 'historic' 4-year Greek Neo-Nazi Party Trial,” France 24, April 19, 2019. https://www.france24.com/en/20190419-endgame-historic-4-year-greek-neo-nazi-party-trial.