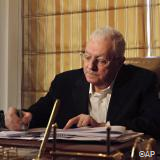 George Haswani is a U.S.- and EU-sanctioned businessman in Syria who stands accused of acting on behalf of the Assad government and serving “as a middleman for oil purchases by the Syrian regime from ISIL,” also known as ISIS.

George Haswani is a U.S.- and EU-sanctioned businessman in Syria who stands accused of acting on behalf of the Assad government and serving “as a middleman for oil purchases by the Syrian regime from ISIL,” also known as ISIS.Associated Press, “AP Interview: Syrian magnate denies buying Islamic State oil,” Yahoo News, March 10, 2015, http://news.yahoo.com/ap-interview-syrian-magnate-denies-buying-islamic-state-141721583.html;
“Syria Designations,” U.S. Department of the Treasury, November 25, 2015, https://www.treasury.gov/resource-center/sanctions/OFAC-Enforcement/Pages/20151125.aspx. Based in Syria and carrying Russian citizenship, Haswani is co-owner of HESCO Engineering and Construction Company and, according to his EU designation, maintains close ties to the Syrian regime.“COUNCIL IMPLEMENTING REGULATION (EU) 2015/375 of 6 March 2015 implementing Regulation (EU) No 36/2012 concerning restrictive measures in view of the situation in Syria,” EUR-Lex, March 7, 2015, http://eur-lex.europa.eu/legal-content/EN/TXT/?uri=uriserv:OJ.L_.2015.064.01.0010.01.ENG.

In 2014, reports emerged that Haswani and HESCO were facilitating illicit oil trade between ISIS and the regime.“Who is George Haswani who facilitates the sale and purchase of oil between the Islamic State and the Syrian Regime?” (Arabic), all4Syria, September 2, 2014, http://all4syria.info/Archive/165946. According to a source speaking to the Financial Times, Haswani had “direct access” to Syrian president Bashar al-Assad, and brokered contracts between ISIS and the Syrian government. He also operates a natural gas facility in Tabqa run jointly by the Syrian regime and ISIS.Sam Jones, “New EU Syria sanctions reveal regime collusion with Isis,” Financial Times, March 7, 2015, http://www.ft.com/intl/cms/s/0/324b07f6-c42a-11e4-9019-00144feab7de.html#axzz3t0faIkKH.

“The alleged activities of Haswani and HESCO in supporting violent extremist groups such as ISIS clearly merits a robust and immediate response,” Wallace wrote. “We hope OFAC will take appropriate action to disrupt the alleged ISIS-related business activities of Haswani, HESCO and its affiliated entities and subsidiaries. In doing so, OFAC will severely degrade the ability of extremist “enablers” such as Haswani to facilitate ISIS’s illicit oil trade and establish a powerful precedent, and deterrent for others seeking to put profits before international peace and security.

Wallace wrote Haswani directly on March 6, 2015, posing a series of questions regarding his alleged activities and the activities of his company, HESCO engineering, in illicit oil and gas trading between the Assad regime and ISIS.

“The purpose of this letter is to convey our deepest concern regarding the apparent involvement of your company, HESCO Engineering & Construction Co.’s (“HESCO”), in the illicit oil trade between the Islamic State in Iraq and al-Sham (“ISIS” a.k.a. “ISIL” a.k.a. IS”) and the Syrian government under Bashar al-Assad,” Wallace wrote. “It appears that you and your company HESCO play an indispensable role in facilitating financial support to ISIS.”

George Haswani responded to CEP’s letter with a letter delivered to CEP by facsimile on March 23, 2015. In that letter, Mr. Haswani purports to clarify his company’s involvement with the Nusra Front, ISIS and the Assad regime.

Click here to read the March 18, 2015 CEP letter to the U.S. Department of the Treasury.

Click here to read the March 23 letter from Haswani to CEP.