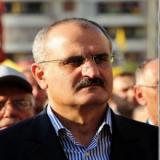 Ali Hassan Khalil is a U.S.-designated national and the former Lebanese minister of finance.

Ali Hassan Khalil is a U.S.-designated national and the former Lebanese minister of finance. According to the U.S. Department of the Treasury, Khalil exploited his position in the Lebanese government to provide funding and resources to Hezbollah-owned companies. Although Khalil was not directly connected to the Beirut port explosion on August 10, 2020, Hezbollah was granted considerable control over the area’s activities during Khalil’s time in office. Hezbollah’s negligence over port safety is alleged to be the source of the deadly blast.“Treasury Targets Hizballah’s Enablers in Lebanon,” U.S. Department of the Treasury, September 8, 2020, https://home.treasury.gov/news/press-releases/sm1116; Ian Talley and Nazih Osseiran, “U.S. Seeks to Reshape Lebanese Government With New Sanctions,” Wall Street Journal, September 8, 2020, https://www.wsj.com/articles/u-s-sanctions-two-former-lebanese-government-officials-11599587476.

According to the Treasury Department, Khalil—a senior official in the Hezbollah-allied, Shia Muslim Amal movement—worked closely with Hezbollah to provide the group financial gain. Khalil served as the minister of public health from 2011-2014, before becoming minister of finance from 2014 to 2020. Allegedly in late 2017, shortly before the Lebanese parliamentary elections in May 2018, Khalil reached an agreement with Hezbollah to receive support for his political success. Khalil supposedly redirected money in a way that would allow Hezbollah-associated institutions to evade U.S. sanctions enforcement from government ministries.“Treasury Targets Hizballah’s Enablers in Lebanon,” U.S. Department of the Treasury, September 8, 2020, https://home.treasury.gov/news/press-releases/sm1116.

Under his role as minister of finance, Khalil attempted to have U.S. financial restrictions on Hezbollah eased so that the group could more easily move funds. Furthermore, Khalil exempted a Hezbollah-affiliate from paying taxes on electronic imports to Lebanon. However, a portion of the money that was collected was redirected towards supporting Hezbollah. In late 2019, Khalil further exploited his powers in office as he sought to elicit kickbacks by refusing to sign checks payable to government suppliers unless he was directly given a percentage of the contracts.“Treasury Targets Hizballah’s Enablers in Lebanon,” U.S. Department of the Treasury, September 8, 2020, https://home.treasury.gov/news/press-releases/sm1116.

On August 4, 2020, a large explosion caused by improperly stored ammonium nitrate erupted at the port of Beirut, leading to a series of smaller blasts that accumulated into one large supersonic blast throughout the city. The explosion caused immeasurable damage to the capital. Around 191 people were killed, 5,000 others were injured, and over 300,000 people were left homeless.“Beirut explosion: What we know so far,” BBC News, August 11, 2020, https://www.bbc.com/news/world-middle-east-53668493. The explosion resulted in mass protests against government negligence and corruption and led to the resignation of Prime Minister Hassan Diab’s entire cabinet on August 10, 2020, including Khalil.Ben Hubbard, “Lebanon’s Government Resigns Amid Widespread Anger Over Blast,” New York Times, August 10, 2020, https://www.nytimes.com/2020/08/10/world/middleeast/lebanon-government-resigns-beirut.html; Emily Beeken, “US sanctions former Lebanon government ministers for connections to Hezbollah,” Jurist, September 10, 2020, https://www.jurist.org/news/2020/09/us-sanctions-former-lebanon-government-ministers-for-connections-to-hezbollah/.

While the investigation is ongoing, Hezbollah’s “unofficial” control over activities in the port of Beirut has made the Iranian-sponsored terror group culpable, as they are known to use the port for illegal drug smuggling operations and other criminal activities. According to Lebanese intelligence sources, Hezbollah-controlled buildings in the port housed weapons and fireworks, and the explosions were reportedly sparked by a fire at one of the Hezbollah warehouses.“Beirut Explosion Increases Scrutiny Of Lebanese Political Class, Role Of Hezbollah,” Counter Extremism Project, August 12, 2020, https://www.counterextremism.com/press/beirut-explosion-increases-scrutiny-lebanese-political-class-role-hezbollah.

On September 8, 2020, Khalil was listed as a Specially Designated National by the U.S. Department of the Treasury’s Office of Foreign Assets Control for providing material support to Hezbollah and for engaging in corruption. Although the Treasury Department did not directly blame Khalil’s activities for resulting in the Beirut explosion, the designation serves as a way to amplify calls for a more transparent and accountable government in Lebanon.“Treasury Targets Hizballah’s Enablers in Lebanon,” U.S. Department of the Treasury, September 8, 2020, https://home.treasury.gov/news/press-releases/sm1116; “US sanctions two former Lebanese ministers over Hezbollah links,” Al-Monitor, September 9, 2020, https://www.al-monitor.com/pulse/originals/2020/09/lebanon-sanctions-finyanus-khalil-beirut-hezbollah-oort.html.