“Abu Ramzi Ashami” is an ISIS propagandist operating on Twitter. He has remained active on the social media platform despite incurring numerous suspensions since at least 2014.“Latest Articles: IS Supporter Calls for Attacks on British Sheikhs Who Support War on Terror,” Site Intelligence Group, October 14, 2014, https://news.siteintelgroup.com/Jihadist-News/is-supporter-calls-for-attacks-on-british-sheikhs-who-support-war-on-terror.html.

Ashami applauded the March 22, 2016, ISIS attacks in Brussels, Belgium, and warned of more carnage. He tweeted, “You bomb us in the East, we bomb you in the West. An eye for an eye, a tooth for a tooth….” Ashami also spread ISIS’s claim of responsibility via Twitter.Abu Ramzi Ashami, Twitter post, March 22, 2016. 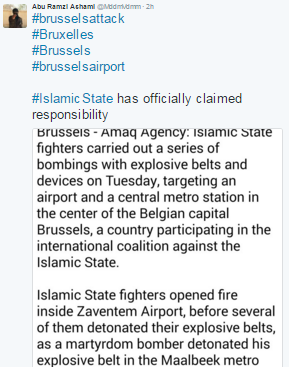 Translation: “Await more bombs, more deaths! Next in Germany, too!”

Translation: “We will kill you all with knives, machine guns, and bombs!”

Ashami has tweeted that he was radicalized by reading Islamic works translated by Anwar al-Awlaki,Abu Ramzi Ashami, Twitter post, July 15, 2015. an American propagandist for al-Qaeda in the Arabian Peninsula (AQAP) who was killed in a U.S.-led airstrike in 2011.Peter Bergen, “The American who inspires terror from Paris to the U.S.,” CNN, January 12, 2015, http://www.cnn.com/2015/01/11/opinion/bergen-american-terrorism-leader-paris-attack/.

In October 2014, Ashami used a now suspended Twitter handle to urge British jihadists to target “sheikhs” helping law enforcement combat extremism in Britain. In October 2014, Ashami wrote: “[I advise] brothers in the UK, to prioritize the killing of the ‘sheikhs’ that work with the Antiterror police.”“Latest Articles: IS Supporter Calls for Attacks on British Sheikhs Who Support War on Terror,” Site Intelligence Group, October 14, 2014, https://news.siteintelgroup.com/Jihadist-News/is-supporter-calls-for-attacks-on-british-sheikhs-who-support-war-on-terror.html.

Ashami also uses Twitter to support fellow propagandists by retweeting their statements and providing links to their social media profiles, activities, and writings. On September 20, 2015, Ashami retweeted posts from Abu Sulaymaan, who asked followers to keep the murderer of filmmaker Theo Van Gogh in their prayers.Abu Ramzi Ashami, Twitter post, September 20, 2015. Van Gogh was killed in 2004 for his documentary, “Fitna,” which depicted Quranic verses painted on the body of a naked woman.Rachel Donadio, “Provocateur’s Death Haunts the Dutch,” New York Times, October 30, 2014, http://www.nytimes.com/2014/11/02/arts/provocateurs-death-haunts-the-dutch-.html.

Miski reportedly surrendered to the Somali government in December 2015. Ashami defended Miski on Twitter, tweeting, “Our brother #MujahidMiski got caught by the apostate government of Somalia near Barawe. HE DID NOT HAND HIMSELF OVER TO THEM.”Mukhtar Ibrahim, “Minnesota jihadist offered advice, support online,” Minnesota Public Radio, December 10, 2015, http://www.mprnews.org/story/2015/12/10/miski. Ashami further encouraged al-Shabab members to join ISIS and pledge bayah, or allegiance, to the caliphate.Abu Ramzi Ashami Twitter, October 25, 2015.